William was born in Johannesburg, South Africa, in 1955. 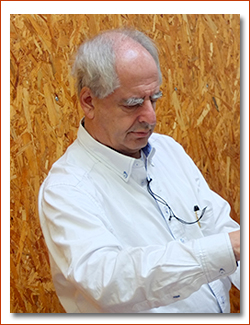 Through his father’s influence, he first studied political science and obtained a degree. Then he turned towards the arts and has a diploma in Fine Arts from Johannesburg. In the late 70’s he moved to Paris to study at the Jacques Lecoq School where one of his teachers was none other than Lassaad Saidi.

From the wealth of this special background and from his deep attachment to South Africa, was to be born his art. It has such a unique personal touch that is to be found in the many shows he has directed and in his numerous animation films.

Between 1975 and 1991, he was both actor and director in the theatre company Junction Avenue in Johannesburg. He was also artistic director for TV series and films.

In William’s work, the videos and films alone bear the trace of the previous drawing. The subjects he tackled in his animation films were mainly political and social. In some of his images he would add a self portrait. It would appear, fall, disappear, reappear… always in constant movement.

His works have been exhibited in Documenta X in Kassel, in one of the Biennales in São Paolo, and in Venice. Exhibitions of a more personal note have been held in London, New York, Sydney, Kyoto and Johannesburg.

He is also, of course, director of operas – Wozzeck, The Magic Flute, The Nose, to name but three…

In 2010 the Jeu de Paume museum held a William Kentridge retrospective. He directed The Nose, an opera by Shostakovich, assisted by Luc Dewitt. It was coproduced and performed by the MET in New York, then in the festival in Aix en Provence and at the Opera in Lyon.

He had an exhibition in the Louvre on the theme of Egypt in which his drawings « accompanied » some of the works of the museum. His videos were projected in a bed of Louis XIV along with the musical performance of « Telegrams of the Nose »;

He is now preparing a major project to direct the opera « Lulu » with all his team including Luc De Wit. With this in mind he came to the Lassaad School to work with the second year students in February 2014. On Wikipedia you can find his complete bibliography, and many extracts of his works on You Tube.