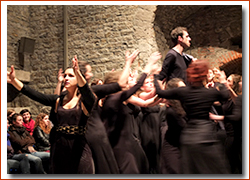 In May 2014 the LASSAAD Theatre School is taking part in the street theater festival « Sortileges » in Ath. Students who are in their final term of studies will be performing two tragedies, Antigone and Medea, just as we could imagine they were performed in Ancient Greece with the strong presence of the chorus.

The force of the chorus will sustain these future actors in their performance. The audience will be taken up in a whirlwind of emotions by the evocation of images suggested by a choreography of movement and borne by the texts of Sophocles and Euripides.

This is an open air festival but the tragedies will be performed indoors in the Tour de Brabant which is a medieval dungeon.

This castle tower was the obvious choice to perform in. It has a magical quality form its past and also from its high vaulted architecture. It links below and above, earth and heaven, just as the verticality of tragedy creates the relationship between men and gods. 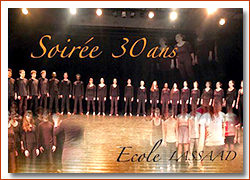 On this occasion, our students, under the direction of Lassaâd and his team, have presented a wide range of their best creations and scenes created throughout the year, in the auditorium of J.Franck Cultural Centre in Brussels.

Following these two beautiful evenings, the school invited his former students to toast together and to blow the 30 candles of the cake. 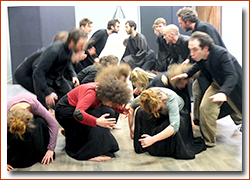 The second year students of the Ecole Internationale de Théâtre LASSAAD (2015/16) performed in an atypical cultural centre in Brussels. They gave a truly astonishing and striking performance of 45 minutes on L’Ursonate by Kurt Schwitters (1920 – futurism/social and artistic movement).

This sonata without instruments was written with only vowels and consonants. In terms of voice, sonority, rhythm and movement their interpretation of the ‘text’ reached a level of excellence.